Methodist Colleges can provide an interesting theme within Methodist philately. 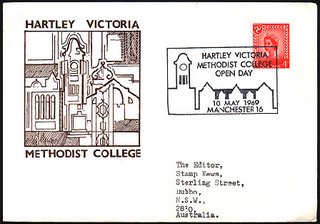 Today's first cover comes from the old Hartley Victoria Methodist College in Manchester. The Manchester Theological College admitted its first students in July 1881. The College's early years were marred by severe financial difficulties, but by the beginning of the 20th century, under the direction of the Principal, Dr Arthur Samuel Peake, 105 students were being trained at the College for the Primitive Methodist Ministry.
In 1906 the College was renamed after the industrialist Sir William Hartley, and in 1934 Hartley College amalgamated with the nearby Victoria Park College to form the Hartley Victoria College. In 1972 the decision was taken to close Hartley Victoria, but the College survived and continues to operate on a smaller scale in premises shared with the Baptist Church. 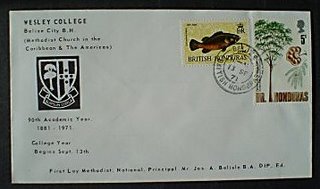 The second cover is from Wesley College, Belize City in the former British Honduras (now Belize). Unlike Hartley Victoria, which existed to train new candidates for the ministry, this College is a church-affiliated secondary school. Together, the two covers show some of the breadth of educational interest within the Methodist Church over many decades.

Posted by David Spender at 6:00 pm