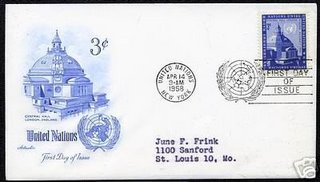 Westminster Central Hall stands in Victoria Street, London, directly opposite Westminster Abbey. The Hall serves as a Methodist Church as well as a conference and exhibition centre.

Central Hall was built in 1912 and funded by 1,025,000 contributors between 1898 and 1908 to the 'Wesleyan Methodist Twentieth Century Fund' (or the 'Million Guinea Fund' as it became more commonly known), whose aim was to raise one million guineas from one million Methodists.

Central Hall hosted the first meeting of the United Nations General Assembly in 1946. It has been regularly used for political rallies - famous speakers include Mahatma Gandhi and Winston Churchill.

On 14 April 1958, the United Nations issued 3c and 8c stamps to commemorate the first meeting of the General Assembly. Both used the same design which pictured Westminster Central Hall and which can be seen on the First Day Covers shown above.
Posted by David Spender at 8:51 pm No comments: 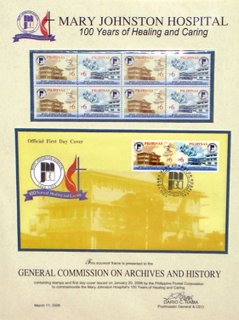 An interesting piece of news about a new Methodist-related stamp issue. Read all about it here: LINK

Posted by David Spender at 3:56 pm No comments: 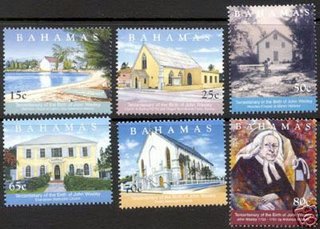 Back in 2003 members of the Methodist Philatelic Society worked hard, but unsuccessfully, at trying to persuade Royal Mail to mark the 300th Anniversary of John Wesley's birth.

It's nice, therefore, to see that some other postal administrations did feel this was an event worth marking. The set illustrated was issued by the Bahamas on 27th April 2004 (so a little late) and shows:
15c Methodist Church at Cupid's Cay, Governor's Harbour. 25c Church at Baillou Hill Road and Chapel Street, Grant's Town. 50c Wooden church at Marsh Harbour. 65c Ebenezer Methodist Church. 70c Trinity Methodist Church. 80c Portrait of John Wesley by Antonius Roberts.
Posted by David Spender at 12:33 pm No comments: