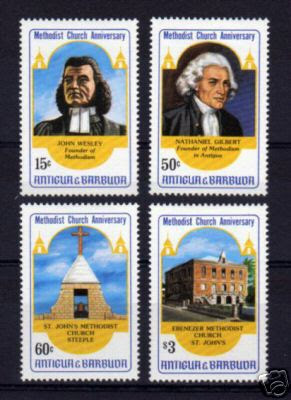 This attractive set, issued on 7th November 1983, celebrates Antigua's Methodist Church Anniversary.
The 15c portrays John Wesley, while the 16c and $3 values illustrate St John's and Ebenezer churches from the Antigua Methodist Circuit.
The 50c features a portrait of Nathaniel Gilbert, described on the stamp as the "Founder of Methodism in Antigua". Gilbert (c.1721-1774) was born on Antigua, the son of a wealthy planter and slave-owner and was a descendent of the famous explorer Sir Humphrey Gilbert.
Gilbert trained for the law in England and returned to Antigua, where he entered the House of Assembly. He visited England in 1757 and was converted after hearing John Wesley preach in London. Upon his return to Antigua, he started preaching to his slaves, although he did not emancipate them, despite John Wesley's urgings. This marked not only the beginning of Methodism in the West Indies but also the commencement of the movement's missionary activities.
Gilbert remained prominent in Antiguan affairs and was elected Speaker of the House of Assembly in 1763.
Posted by David Spender at 9:15 pm