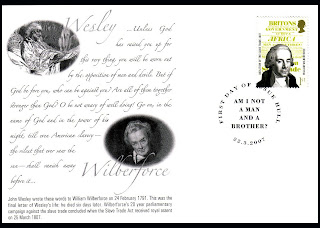 The first cover produced by MPS this year, 2007, is now in stock with the Cover Service Secretary and commemorates John Wesley and William Wiberforce. Issued on 22 March on the first day of issue of the 200th Anniversary of the Abolition of the Slave Trade stamps. The cover design features the letter written by Wesley to Wilberforce on 24 February 1791, encouraging him to continue his work to abolish slavery. This was the final letter of John Wesley's life, he was to die a few days later. Wilberforce's 20 year campaign against the slave trade concluded when the Slave Trade Act received Royal Assent on 25 March 1807. The Royal Mail postmark used is the quote, "Am I not a man and a brother". Covers priced at £2.00 plus postage are available from the Cover Service. As this cover is to hand it will be included in the 2006 sending to subscribers.

Other covers planned for this year will commemorate:

Two other important events will also be celebrated with covers which will also bear special one-day hand-stamps. The first, in May, will recognise the 200th anniversary of the First Camp Meeting of the Primitive Methodist Church at Mow Cop. The design selected illustrates Hugh Bourne and William Clowes, the founders of Primitive Methodism and is based on the frontispiece of a book published many years ago. Royal Mail have approved Paul MacMillan's artwork for the hand-stamp, featuring the folly at Mow Cop.

The second sponsored hand-stamp is planned for the tercentenary of the birth of Charles Wesley and at this time is only at the planning stage until Royal Mail releases details of the miniature sheet planned for issue in November. We have learned that Ireland will issue a stamp for this event and it is thought that Montserrat are also planning to release stamps to celebrate this notable occasion. Arrangements are being made with MPS members in the USA to produce a Charles Wesley cover with a Georgia hand-stamp.

During the latter months of the year we will see the launch of the Methodist Church in Wales and there is a possibility that something may be done for this too.

Can I also mention that I hold a "for sale" list of Methodist covers going back over many years. If it is of interest please contact me for more details.