The following details come from the Irish Stamps website:
300th Anniversary of the Birth of Charles Wesley
Charles Wesley (1707-1788) and his brother John were instrumental in the birth of the Methodist tradition. Their teachings and practices earned the name 'Methodist' because of their strict adherence to the Book of Common Prayer. Charles Wesley is also remembered for his achievements in lyrical composition. Over the course of his lifetime, he published the words of more than five and a half thousand hymns, and composed the words for a further two thousand. Among these are a number of timeless classics, including Hark! The Herald-Angels Sing. The stamp was designed by Steve Simpson, based on a painting entitled The Lily Portrait-which is reproduced courtesy of the Methodist Studies Unit, Oxford Brookes University, England. The First Day Cover, also designed by Steve Simpson, features a church organ from Saint John's in the Wood Church, Dartry, Co. Monaghan.

A Methodist cover from Switzerland 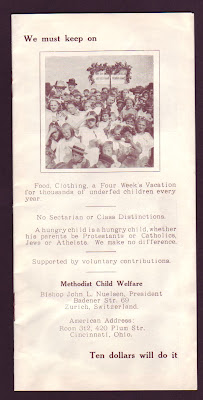 An interesting 1927 "printed matter" cover and contents from an American Methodist charity "Methodist Child Welfare" based in Zurich. Click on the pictures to view them full size.

Posted by David Spender at 9:04 am No comments: