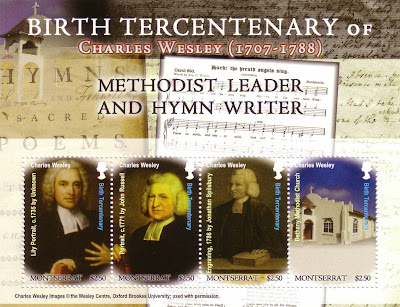 Another new issue for Charles Wesley, this time from a British overseas territory, the Caribbean island of Montserrat.

The Montserrat Post Office will issue a miniature sheet on 18th December to mark the 300th Anniversary of the birth of Charles Wesley. The sheet features four $2.50 stamps, three of which show portraits of Charles. The fourth stamp portrays Bethany Methodist Church on the island.

Montserrat's Georgian-era capital city of Plymouth was destroyed and two-thirds of the island's population forced to flee abroad by an eruption of the previously dormant Soufriere Hills volcano that began on 18 July 1995. The eruption continues today on a much reduced scale, the damage being confined to the areas around Plymouth including its docking facilities and the former W.H. Bramble Airport.

Posted by David Spender at 9:22 am