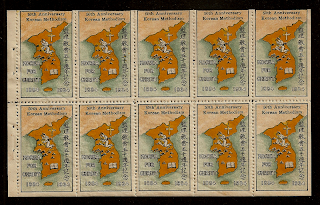 Poster stamps can be defined as any stamp (non-denominated) created to advertise or commemorate a product or event. The evolution of the poster stamp is that it was originally a miniature version of a poster issued to advertise or commemorate a product or event.
This particular poster stamp (click on the picture to see it full size) was issued in Korea in 1934 and marked the 50th Anniversary of the establishment of Methodism in that country. Methodism has continued to thrive in Korea with the autonomous Korean Methodist Church now claiming 1.5 million members.
Posted by David Spender at 9:52 pm No comments: